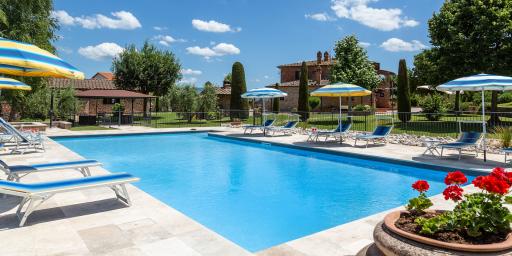 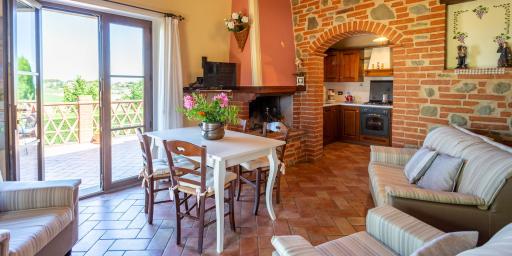 Go to page
Our apartments 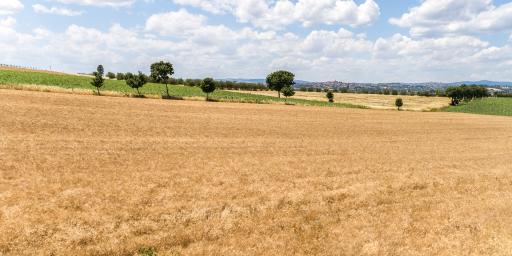 Go to page
Other accommodations
About us 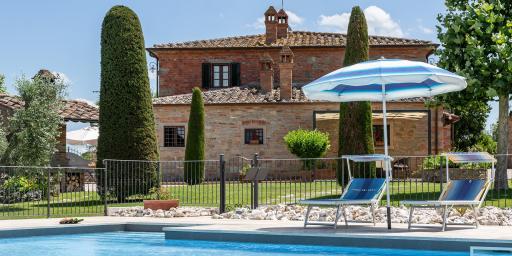 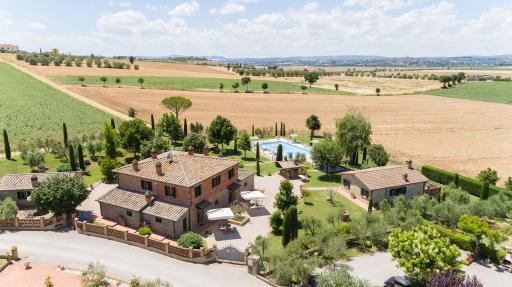 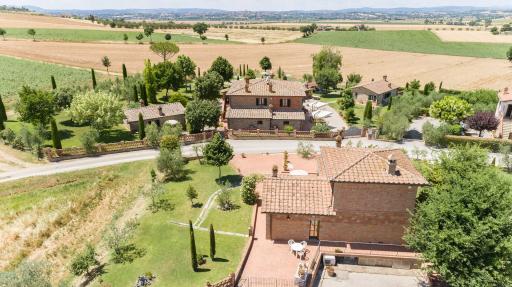 Go to page
How to get here 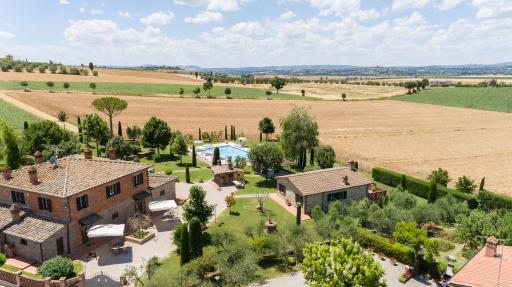 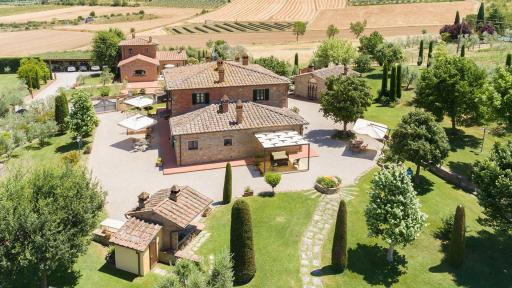 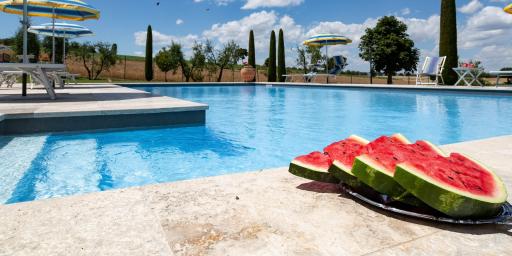 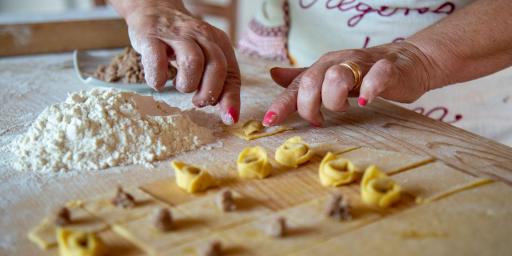 Book one of our apartments 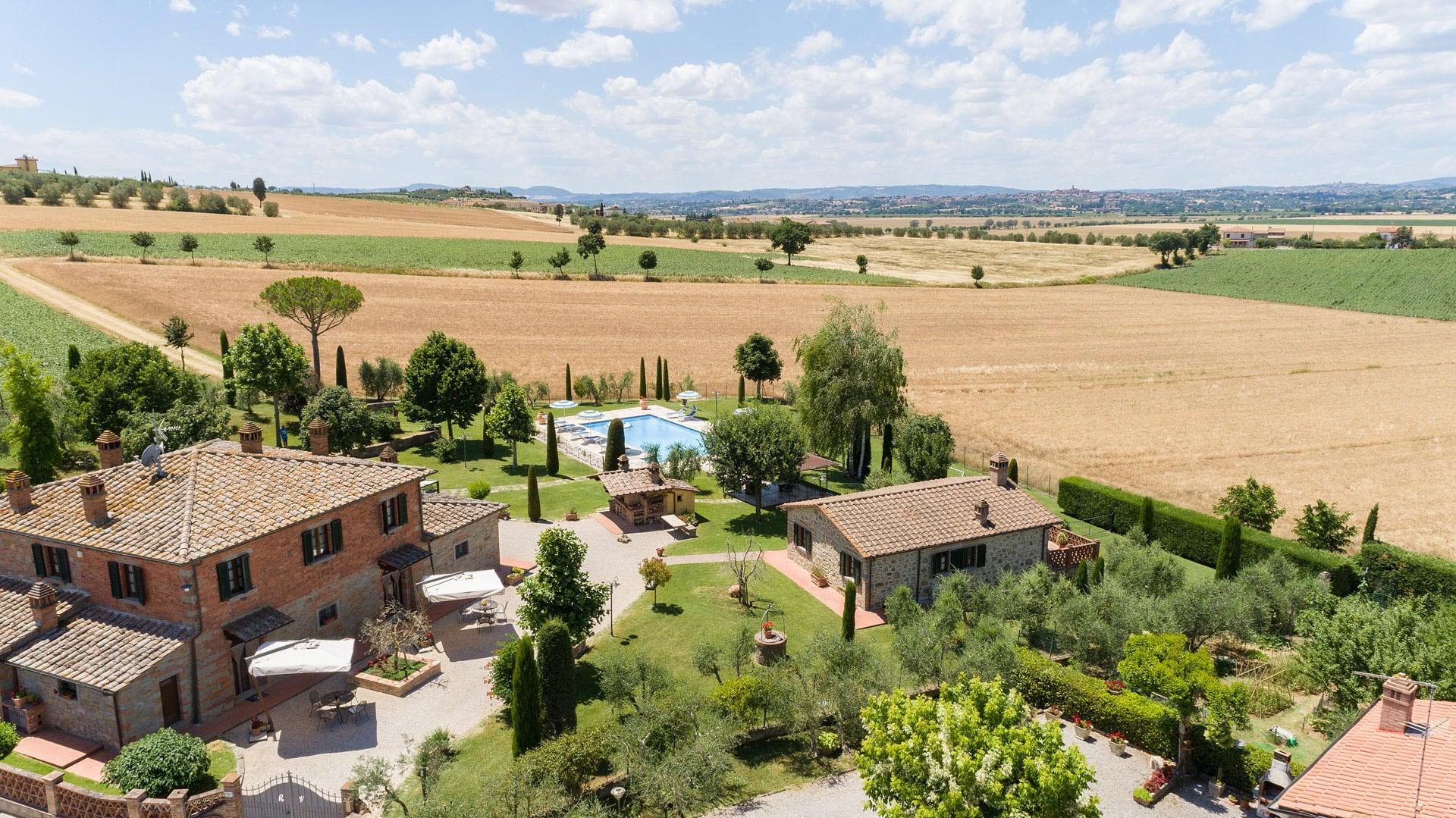 At Villa Rosa dei Venti you can travel with your imagination while relaxing by the pool, a glass of wine paired with local cheeses and cured meats and homemade bread by your side, or you can see major artistic, historical, and cultural sights first hand.

Let Villa Rosa dei Venti be the compass that will direct your excursions and tours through the wonders of Tuscany and Umbria: from Florence, Siena, and Arezzo to Lake Trasimeno; take in the treasures of Perugia, Assisi, Spello, and Todi. The beauty of a vacation at Villa Rosa dei Venti lies in the number of options available to our guests. Everything depends on you. Barbara and Stefano are happy to help you organize your itinerary. It’s never a problem and always a pleasure. 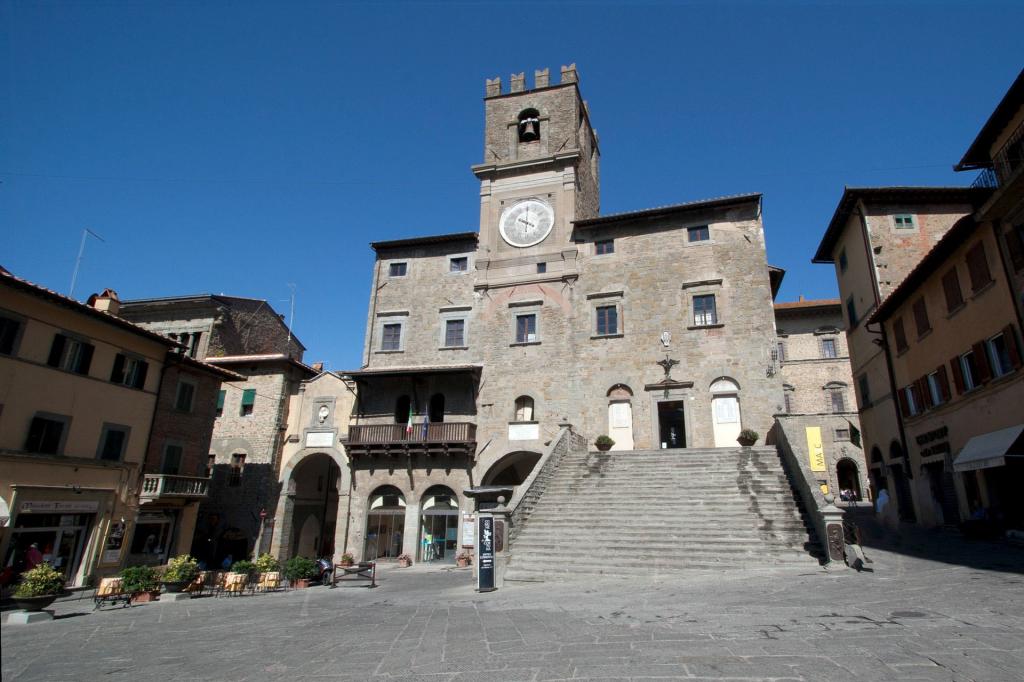 This Etruscan hill town looks out over the Valdichiana. The view is breathtaking, and you can see all the way to Lake Trasimeno in Umbria. Cortona has a unique and cosmopolitan history: tourists from all over the world have fallen in love with it, and many of them have chosen to make it their home.

The old city has a historical and artistic heritage of inestimable value. Admire the Tabula Cortonensis, which attests to the city’s Etruscan roots, the masterpieces of Luca Signorelli with the Annuciazione by Beato Angelico, and the Futurist masterpieces by Gino Severini. The ancient palazzi within the city walls tell the story of the great families of Cortona but there are other significant sights worth visiting: the Sanctuary of Santa Margherita, the patron saint of Cortona; the Franciscan Hermitage of Le Celle; and the Fortress of Girifalco. 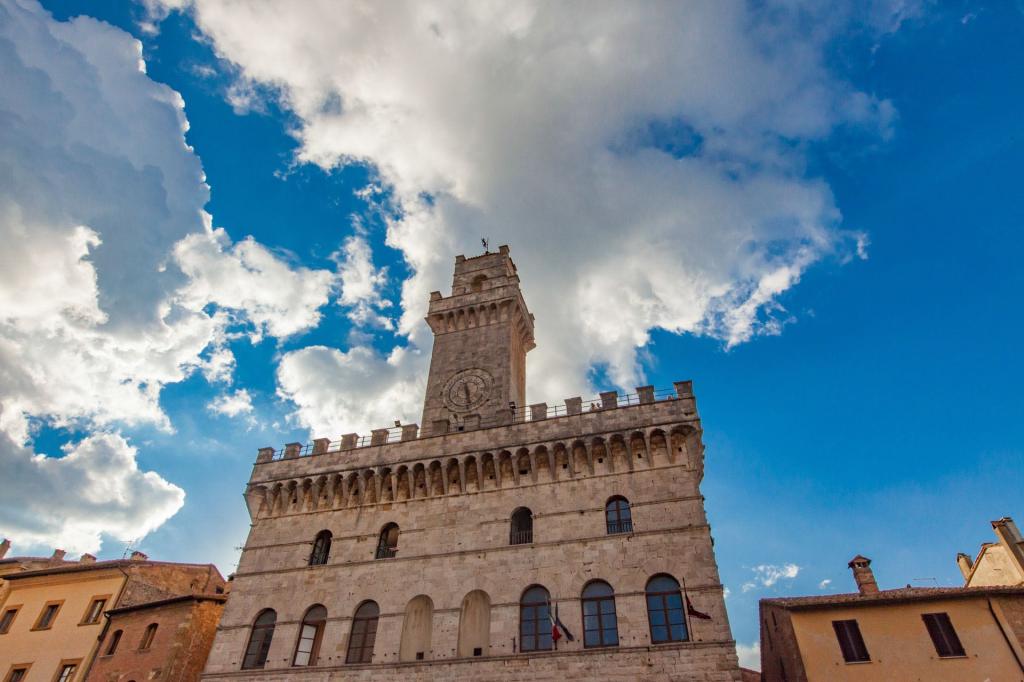 The symbol of this hill town is Piazza Grande, the ideal place to stroll and meet with friends. Enjoy the view of ancient buildings of rare architectural beauty designed by the great architects of the Renaissance, including Michelozzo Michelozzi.

Montepulciano boasts Etruscan roots but had a key role in the wars between Siena and Florence over the centuries. Since ancient times, the city has been steeped in trade, and still today the streets of the old town are lined with shops selling art and antiques, handmade fabrics, and local products. One of them is the Vino Nobile di Montepulciano, a wine that is appreciated throughout the world.

One of the most unique events in Montepulciano is the Bravìo delle Botti competition. But don’t miss the extraordinary cathedral and the well with the Medici coat of arms designed by Sangallo. 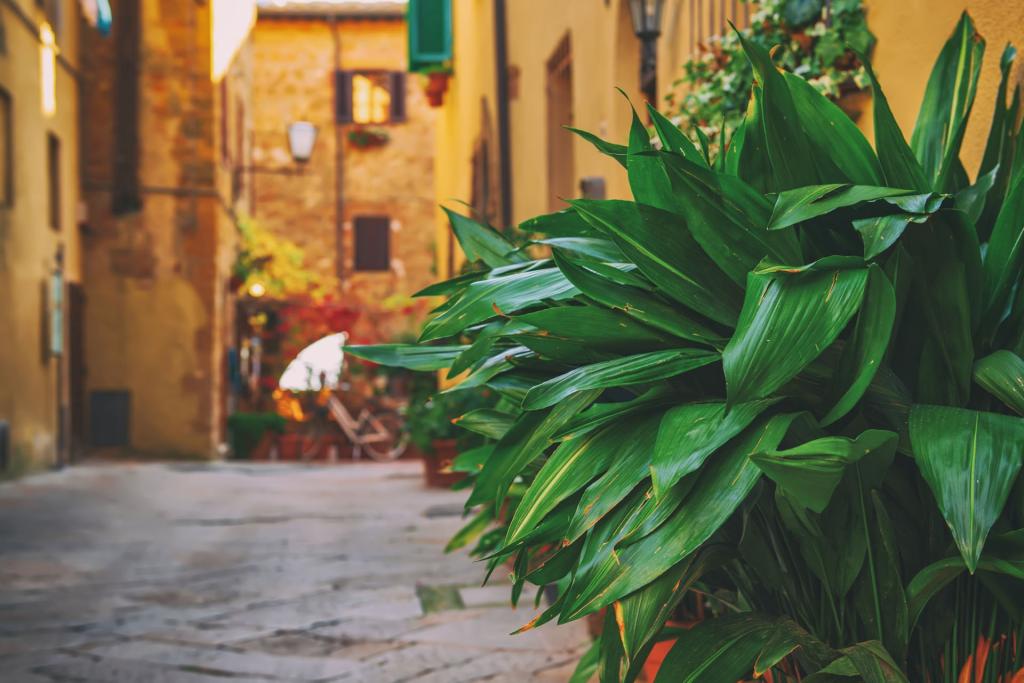 Pienza is a mini “Vatican City” set in the Val d’Orcia. Pienza’s name comes from the papacy and specifically to Pius II. Enea Silvio Piccolomini, who was named Pope in 1458, redesigned the village of Corsignano where he was born and entrusted the project to Rossellino, a pupil of Leon Battista Alberti. This was how Pienza was born. Since then, it has been recognized as a UNESCO world heritage site. Its 16th-century palaces and piazzas are breathtaking. Don’t miss a visit to Palazzo Piccolomini, also known as Palazzo Pontificio, which overlooks a splendid Italian Renaissance garden designed to bring the visitor into contact with the Val d’Orcia. A balance between Gothic and Renaissance styles is found in the Cathedral of Santa Maria Assunta.

A tasting of cheeses from local farms and an autochthonous wine will complete your visit to Pienza. 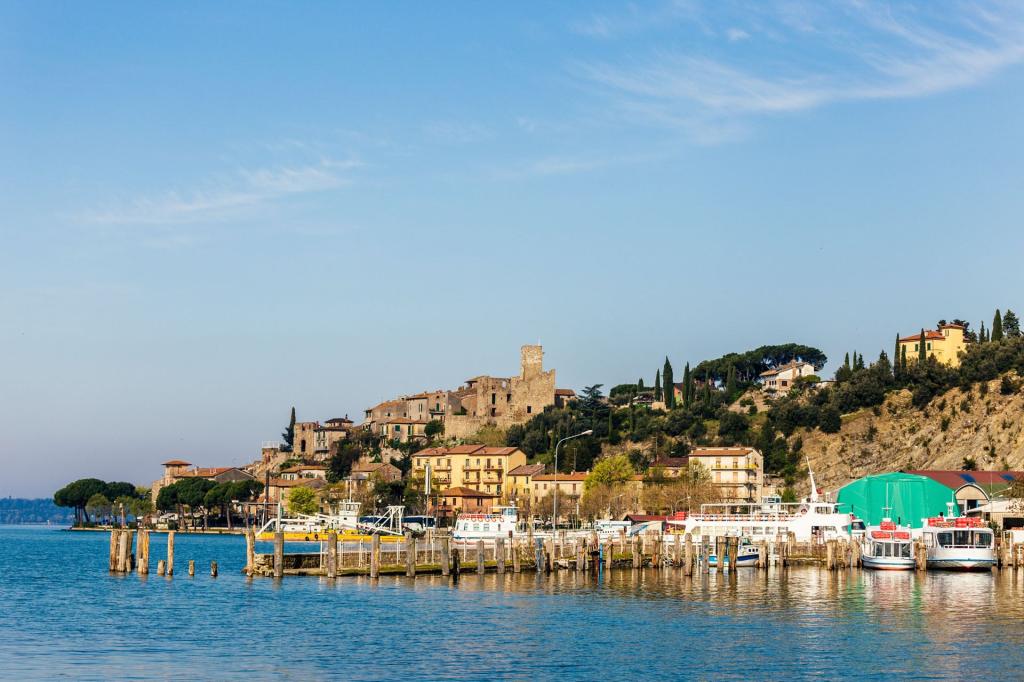 Lake Trasimeno is a mirror to the sky and is located in the green heart of Umbria. It feels magical, as if it is enchanted. Migratory birds rest from their long journeys in the reeds and marshes, and the islands speak of ages past.

Lake Trasimeno is a natural jewel just a few kilometers from Cortona. Surrounded by hills, olive groves, wheat and grain fields, and vineyards, the breezes from the lake create a microclimate that favors agriculture. Delightful villages rise up on its hilly shores, like so many windows that open onto the beauty, while larger nearby towns also worth visiting maintain an equally strong bond to the lake: Città della Pieve, Passignano, Castiglion del Lago, Panicale, Castel Rigone, Monte del Lago. Explore this natural “paradise” and its treasures, the DOC wines, and the characteristic Fagiolina del Trasimeno. 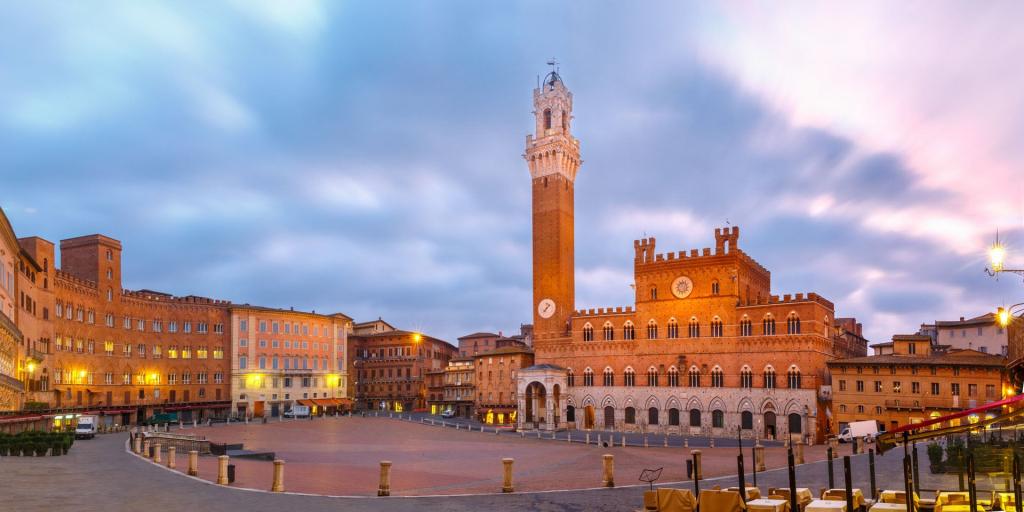 Home to the Palio, Santa Caterina, important artworks, and a high quality of life, Siena is just a few kilometers from Villa Rosa dei Venti, and just waiting to be discovered.

UNESCO has inscribed Siena on the list of World Heritage Sites because it has managed to preserve the medieval citadel that in 1200 began a long period of development and artistic wealth. One example of this is Piazza del Campo, with its unmistakable shell shape, and the imposing Torre del Mangia. Every July 2 and August 6, the Palio takes place here. This unique event affects the whole of the city and its Contrade, the rivalling neighborhoods.

The Duomo, with its inlaid floor, is one of a kind and can’t be missed. The Santa Maria della Scala is situated not far away and is definitely worth visiting, with its masterpieces of art and extraordinary exhibitions. Surrounding the city are the geographical wonders of the Crete Senesi: a miracle for the eyes and the heart that mustn’t be missed. 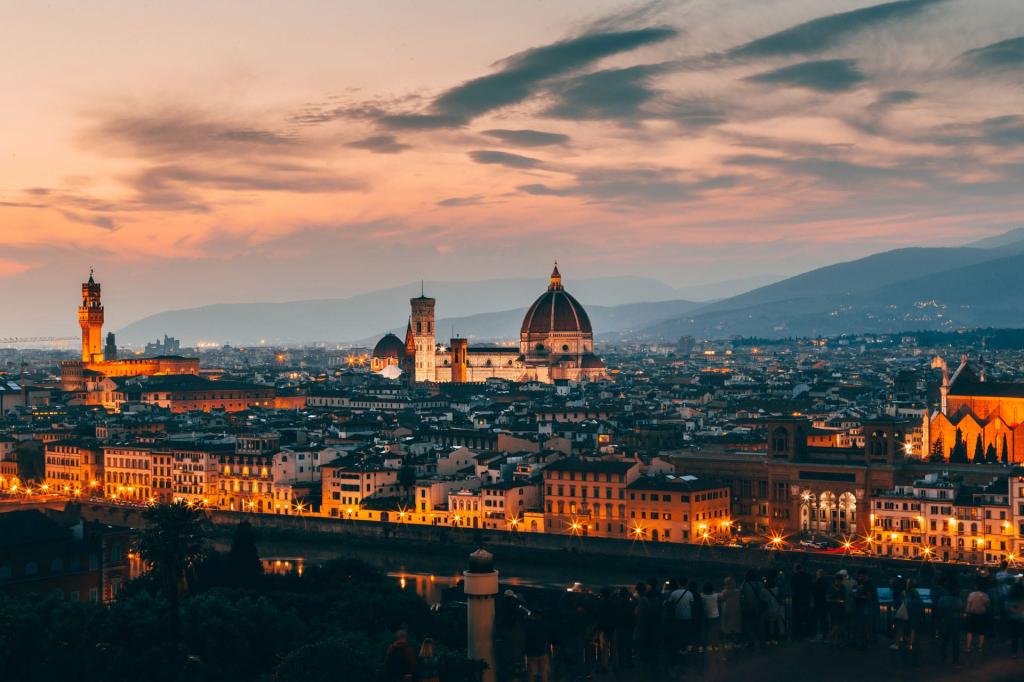 Florence, the cradle of the Renaissance, is easily reachable from Villa Rosa dei Venti. The city is a treasure chest of art and architecture that tells endless stories about life under the influence of the Medici family. The passing of centuries has not affected the eternal splendor of this city.

The “heart” of Florence is located between Piazza della Signoria - with its Town Hall, the Uffizi Gallery, and thousands of visitors every day - and Piazza del Duomo, with its splendid Basilica of Santa Maria del Fiore, Brunelleschi’s dome, Giotto’s Bell Tower and the Baptistery of San Giovanni. Do not miss a visit to the Museo dell’Opera di Santa Maria del Fiore, the Galleria dell’Accademia which houses Michelangelo’s David, the monumental complex of San Lorenzo with the famous Medici Chapels, or the imposing Palazzo Strozzi.

Look back on the city’s history from Ponte Vecchio, overlooking the river Arno, or Piazzale Michelangelo. It’s so difficult to summarize the wonders of Florence and much easier to live them! 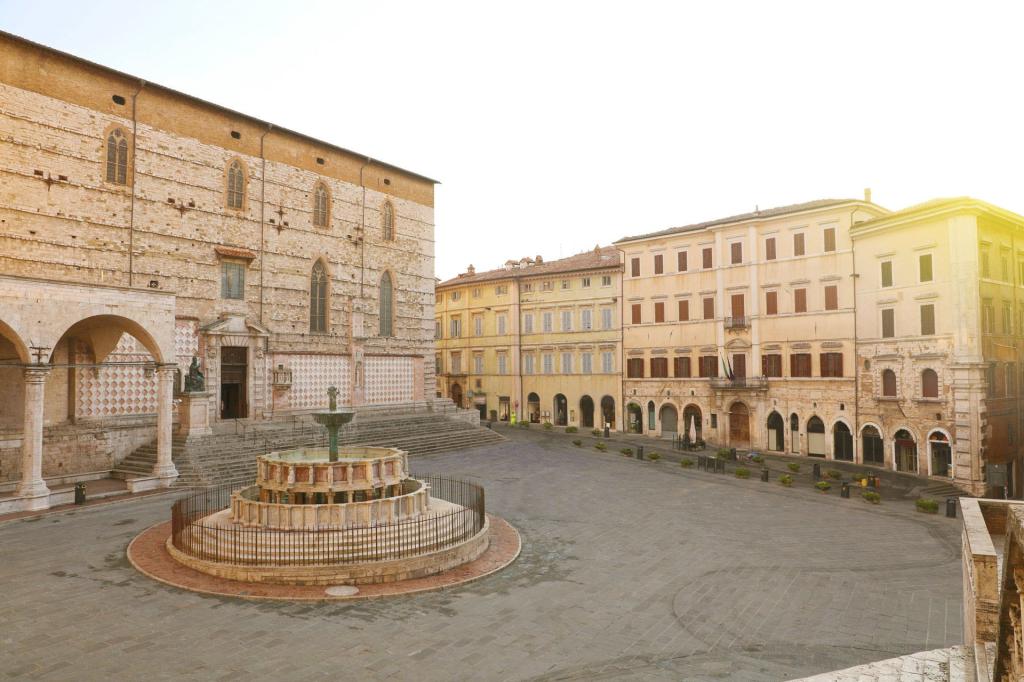 Perugia is a charming university city with treasures of art and monuments that testify to its strong cultural identity. It has always been the heart of Umbria, a perfect synthesis of art and nature, history and knowledge. Perugia is home to one of the oldest universities, established in 1308, and the largest university for foreigners in Italy.

The city has maintained the characteristics of a medieval village. And yet, it is vibrant and intense. There are several itineraries that make Perugia a special destination for those who want to enrich their sense of culture and knowledge. Visit the Fontana Maggiore, a reference point for locals and visitors alike; the busy Corso Vannucci, from the Rocca Paolina to the Cathedral of San Lorenzo and the Oratory of San Bernardino.

For gourmets who love chocolate and art, you’re in luck: the art of Perugina and the Perugina Baci have both conquered the world. 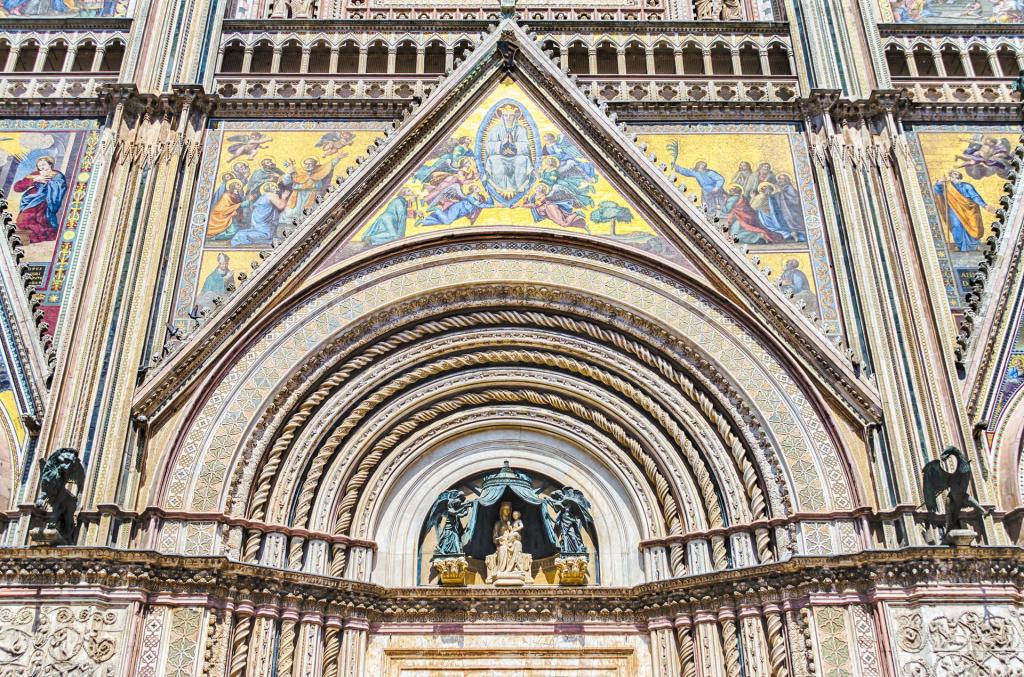 Orvieto is situated on a colossal piece of tufa and resembles a ship plowing through the green waters of luxuriant nature. It is easy to get to from Villa Rosa dei Venti and offers unique emotions.

Its chief wonder is the Duomo, a precious example of European Gothic architecture and home to major works of art, including frescoes by Beato Angelico and Luca Signorelli in the chapel of San Brizio. Another place that must not be missed is the Well of Saint Patrick, a masterpiece of hydraulic engineering. Don’t miss the beautiful Piazza del Popolo and the Torre del Moro with its incomparable clock tower. No visit to the city would be complete without one of its renowned meals. Specialties include foods from local farms (cheeses, salami, Chianina) and the DOC Orvieto wines (Grechetto for the white wines, Cabernet and Aleatico for the red ones). Orvieto is filled with delights. 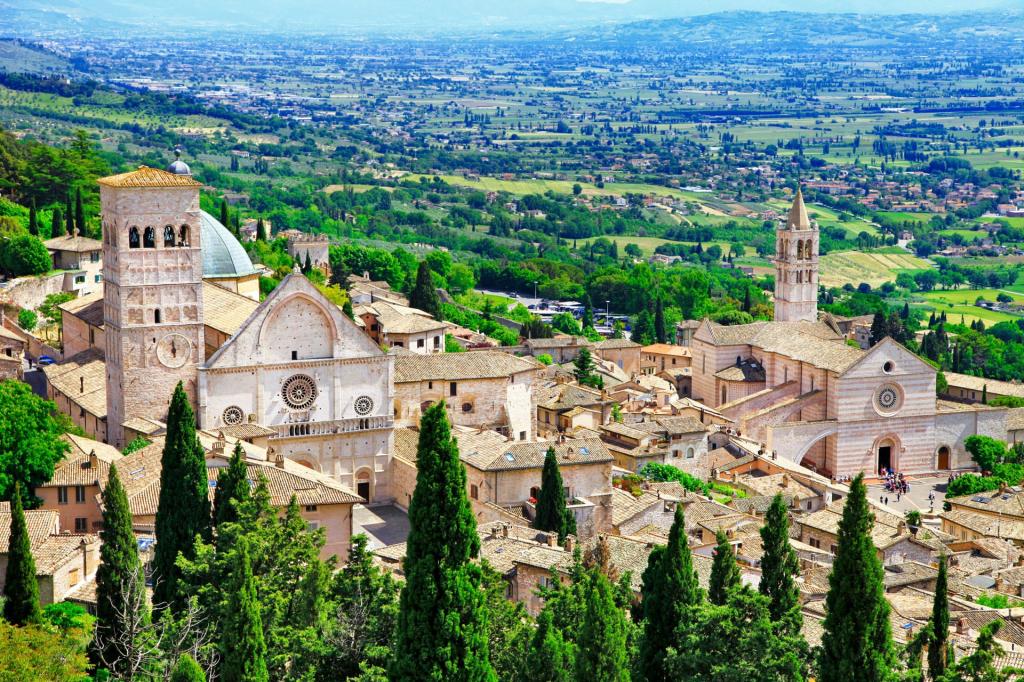 Assisi is “a step away from heaven” because of its connection to Saint Francis, who left Assisi to change the world and the Church. Perched on the top of a hill, the city looks at the Basilica of Santa Maria degli Angeli, where Francis began his journey.

At Porziuncola, a small stone church later englobed by a majestic building, the Saint composed his “Canticle of the Creatures.” The name of Assisi is inextricably linked to another figure who shared the mission among the poor: Saint Clare. The Basilica of St. Francis contains masterpieces of art, including works by Giotto, Simone Martini, and Cimabue in the upper church.

A visit to Assisi usually follows a route that includes stops at the Basilica of Saint Chiara, that of St Rufino, the Temple of Minerva, the Piazza del Comune, the Palazzo del Capitano del Popolo and the Palazzo dei Priori, and concludes at the top of the Rocca. In the lower church you will find the remains of St. Francis rest and an intensely spiritual experience. Don’t miss tasting strangozzi and umbricelli, local handmade pasta, and the meat and pecorino cheese of Assisi. 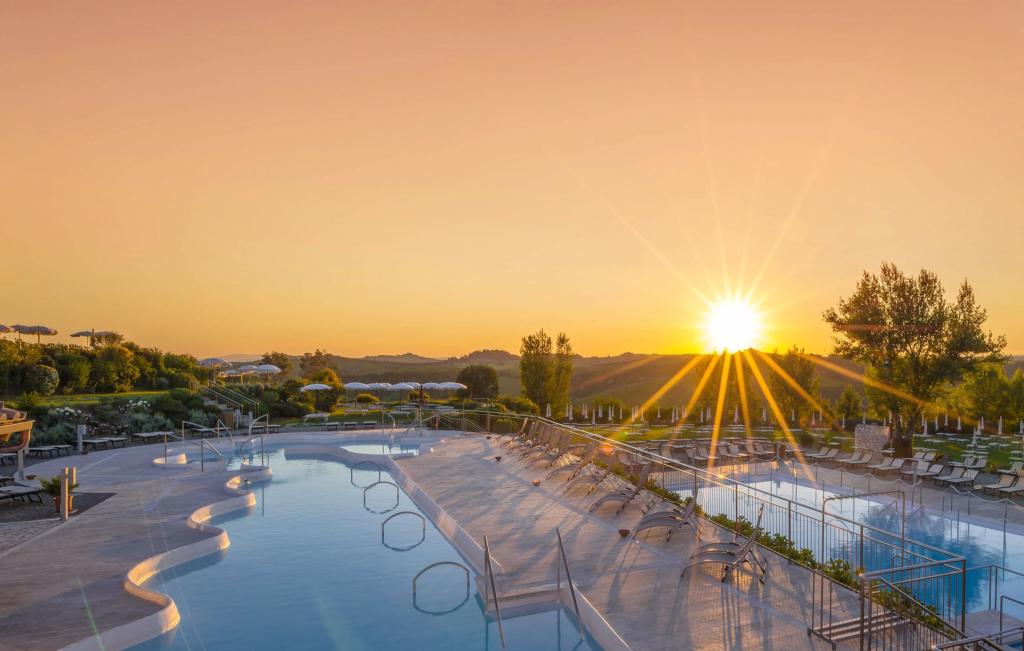 A few kilometers from Villa Rosa dei Venti is Rapolano Terme, a citadel of wellness. This is the perfect place to relax and recharge from the stress of your work and routines. Just close your eyes and let yourself go.

Its thermal waters and spas equipped with all amenities have everything you need to relax in the mesmerizing landscape of the Valdichiana Senese hills. The Antica Querciolaia spa and the San Giovanni spa are the two main reference points for fitness lovers. The town also offers a number of itineraries for you to discover the surrounding landscape, including the beautiful Crete Senesi and the Val d’Orcia, which was declared by UNESCO a world heritage site.

It’s a short drive from Rapolano Terme to Siena where you can go on to absorb the beauty of the city and the Palio with its unique art treasures, including the Duomo.

A visit to Rapolano Terme must include a visit to the vineyards surrounding the area and a tasting of wine and cheese from farms of Siena.